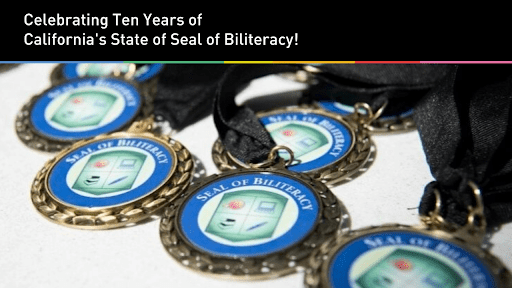 As the 2021-22 school year draws to a close, many students will have graduated from high school with the attainment of the California State Seal of Biliteracy, signifying their proficiency in English and a second language. This will mark the ten-year anniversary since the State Seal of Biliteracy was fully implemented in 2012. California’s adoption of the State Seal of Biliteracy was a remarkable triumph considering the previous 14 years of predominantly English-only instruction. That triumph was made possible by changing public and political attitudes toward multilingual education and would be the start of significant policy change over the next decade, including the passage of Proposition 58 in 2016 and the adoption of the English Learner Roadmap policy in 2017. Additionally, in May 2018, the California Department of Education launched Global California 2030, calling for more than tripling the number of students earning the Seal of Biliteracy, to 150,000 graduates by 2030.

Mastering fluency in one of the 41 different languages represented, including American Sign Language, is a tremendous accomplishment for any student. Speaking two or more languages has proven cognitive, social, and economic benefits. Bilingual students do better academically in English and their home language, have better college-going and completion rates, are preferred by employers, and for language heritage students maintain strong connections to their family members, language, and culture. These students are our future bilingual teachers, doctors, government employees, and artists.

The reverberations of this important policy have resulted in positive outcomes, in California, and across the country. Over the past decade, 49 states and the District of Columbia have adopted a Seal of Biliteracy. (Only South Dakota remains as the last holdout although it is in the early stages of adoption.) Within California (according to 2020-21 school year data), 351 districts with high school students now offer the State Seal of Biliteracy, with 69 districts with high schools yet to offer this distinction. Moreover, 2020-21 had nearly 73,000 students achieving the State Seal of Biliteracy, the most of any previous year. Given the trend over the past decade, we can expect these numbers to keep increasing when they are released for the 2021-22 school year and beyond.

As we celebrate this important milestone, we must continue to expand access to multilingual programs for all students. The Global California 2030 goal of tripling the number of students earning the Seal of Biliteracy, to 150,000 graduates by 2030, provides a call to action and a vision of a multilingual state with benefits to students and the state as a whole.

Below are recommendations to continue to support expanding access to the Seal of Biliteracy: